Three years after the signing of the Peace Agreement with the FARC, Colombia is grappling with the question of how to remember the 50 year armed conflict, and how to honour victims of it. In a lecture on the 15th November, Associate Professor Tatjana Louis argued that there are multiple kinds of memory that can be collectively held. Colombia is currently engaged in preserving cultural memory. This kind of memory is held by groups that do not communicate directly but share a formal bond such as membership in the same nation. This memory operates in a larger time frame and does not focus on specific memories. Those memories are also subject to change less often than communicative memory, and these changes happen more slowly. Not every member of the group can tell those memories, only those with authority such as teachers and historians.

Jörn Rüsen wrote in 1992 that historical consciousness ‘is the individual and collective understanding of the past, the cognitive and cultural factors that form that understanding, as well as the relationships between historical understanding for the present and the future’ (Louis). In other words, the way we remember the past is informed by our present reality and our expectations for the past. This gives a clear impetus for actors to control collective memory and shape it based on their own desires for the future. For Colombia, these factors shape how those with authority remember and present the conflict. Tatjana Louis gave the example of two different textbooks to illustrate this. The one published before the beginning of the peace process that led to the signing of a peace agreement in 2016 made no mention of past attempts at peace. The one published after did. This is likely due to a change in expectations about the feasibility of peace as well as a change in the present reality.

Victims are generally accepted as having a right to take control over the collective memory of their own suffering, but questions arise about who should be considered a victim. This is an especially fraught debate given the currently politically polarised atmosphere in Colombia. Should FARC members be able to shape collective memory as well? Victims generally need active support by society to create the space in which they can tell their own stories. They need to be listened to, so they know that what happened to them won’t happen again. Their memory can also contribute to social reconciliation if it is inclusive and sends the message that the past belongs to everyone in society, not just victims. In Colombia there are multiple initiatives aimed at preserving collective memory of the conflict. One of the most interesting aspects this drive is that they are attempting to remember something that isn’t over. While the 2016 peace agreement ended hostilities with FARC as a whole, three years later we find ourselves with a dissident wing of the group (sometimes known as FARC 2.0), as well as the continued activity of the ELN, among various bandas criminales and other armed groups. Nevertheless, the Centre for Historical Memory and El Centro de Memoria, Paz y Reconciliación (The Centre of Peace, Memory, and Reconciliation) attempt to shape popular perceptions about this time. The latter actually began construction in 2007, and opened in 2012, the year the peace negotiations started.

The National Centre for Historical Memory constructs an archive which it fills with testimonies from victims that it has collected. In this way, it fulfils peoples’ right to information, investigates cases, and educates people about the conflict. The centre also prepares reports on events and issues. However, these do not make a big impact and are normally only read by academics, so victims have a space, but they aren’t necessarily being heard or getting assurances of non-repetition. Nor is the information gathered by the National Centre accepted by Colombian society at large.

Centre of Peace, Memory, and Reconciliation

Another interesting facet of the way the conflict is remembered is that the Colombian government is largely running the memory initiatives. The Centre of Peace, Memory, and Reconciliation museum is sponsored and operated by the government. The site chosen for it is a cemetery that was functional at the time of its construction. 3000 bodies were removed from the area, and more were removed from the various buildings surrounding what is now the main exhibition. The walls of these were decorated by a local artist with varying prints of people carrying bodies. She also painted on the front of each of them: La Vida es Sagrada (Life is Sacred). The museum itself is mostly underground. The visible structure looks on the outside to be a furnished building but is in fact a concrete shell. It was constructed using traditional methods of layering building material and then stomping it down. This has left visible levels in the concrete, routinely punctuated with holes filled with glass tubes containing samples of the soil from 200 victims’ home soil. In this way the impression is created that they built the site, rather than the government. 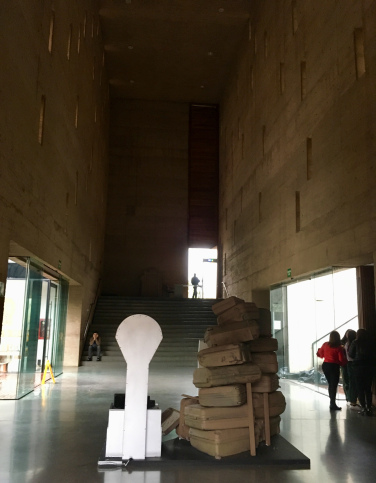 The museum is primarily intended for children and those from Bogotá who see the conflict as something far away from them. The exhibits are designed to bring the events into close proximity. There is a map that shows sites of various crimes such as homicide, and forced disappearance, as well as forced displacement and the presence of mines planted by armed groups within Bogotá itself. There is an exhibit wherein people hear various sounds of the conflict, and see objects imbued with memory. One is the jacket presidential candidate and member of M19 Carlos Pizarro Leon-Gomez, was wearing when he was assassinated. Another is a lock of hair from a social leader who was kidnapped and had her hair cut. Another still is a typewriter from a murdered journalist. These were meant to keep the memory of the conflict in the present and tangible, tethered to items that can be observed, rather than metaphysical.  So victims aren’t themselves heard, but their experiences are being seen, and Colombians are being invited to view the conflict as part of their own lives and something they should remember even if they weren’t directly affected. This could contribute to reconciliation.

There is a tension inherent in the fact that government institutions are responsible for telling the stories of victims, given the role the state played in victimising people, namely by committing war crimes, such as false positives- the retrospective designation of those killed by the armed forces as enemy combatants. This tension is somewhat resolved by the fact that victims’ stories are presented in a somewhat objective way, especially by showing items that belonged to them. However, until victims are able to take over the telling of conflict themselves, the state will maintain its position as the arbitrator of memory. This hegemonic control of how the conflict is remembered also leads to victims being actively silenced, such as when the director of the National Centre for Historical Memory, Dario Acevedo made fun of victims’ plans to include the concepts ‘water, land, and body’ in a memorial museum. He also censored exhibitions in Cali, Villvicencio, and Cucuta (Alsema, 2019).

A way that victims have begun claiming memory of the conflict themselves, without the mediation of the Colombian government is through weaving projects. Victims, especially women, weave tapestries that depict events that happened during the conflict. A notable group of women making these is the Women Weavers of Dreams and Flavours of Peace of Mampuján. They were violently displaced from this region in March 2002, and in 2006 began weaving tapestries depicting the event with figures that represented people in their community. In 2008, the perpetrators of the displacement confessed to and apologised for their crimes under the 2005 Peace and Justice Law. It has been speculated that this apology was accepted by the community because of the reconciliation work of weaving (Art and Reconciliation). More effort should be made to ensure that victims have adequate say in how the conflict is remembered and attention paid to the work they are already doing in the field of memory. The Centre of Peace, Memory, and Reconciliation is a good first step, but it is limited by its affiliation with the state. It will hopefully develop with time as our present changes, and Colombians’ expectations for the future change.