After over 6 months of preparation, 15 hours of flying, and a few thousand dollars, I’ve made it to Arlington Texas – my home for the next 4 months. So I thought I’d share some of my experiences from these first few weeks in the USA!

Preparation:
It goes without saying, but there is a lot of work that has to be done prior to hopping on the plane, and a lot more once you’ve arrived. Of everything, the Visa and Course Approvals were the biggest headache for me, as each one takes time and requires filling out plenty of paperwork. All students coming into the US require an F-1 Visa, which can sometimes take months to process. I had to wait almost 3 months between filling out my online application, and having my interview at the US consulate, so it is crucial that you apply for the Visa as soon as you receive your acceptance letter. And for anyone stressing about the interview, it was super easy, as long as you remember to bring all the correct paperwork such as your passport and I-20 (provided by your host university). I actually spent more time queuing up than I did in the actual interview!

I chose to fly with Air New Zealand from Auckland to Los Angeles with a 2 day layover and then with American Airlines from LA to Dallas-Fort Worth in Texas. I purchased my flights back in May so I could get a cheap fare, this goes against the advice of the US consulate who tell you not to book flights before receiving your visa. So while it makes sense to book early, only do so if you are certain that your visa will arrive in time otherwise you’re looking at a pretty hefty fee to change your flight. 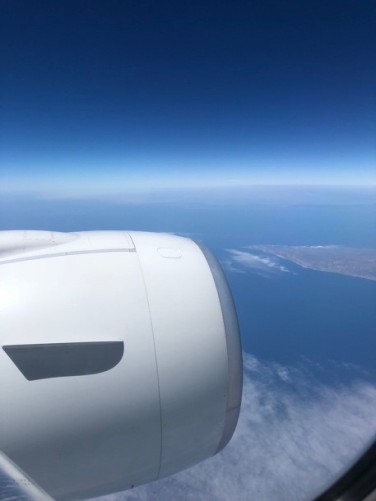 Texans are extremely patriotic and are very proud of their state and its history. As it was once its own independent nation, it has a culture unlike any other state in America. The people I’ve met have been incredibly warm and welcoming and are always happy to help a lost and confused exchange student. The place where I’m staying, Arlington, is also the largest city in the US that has no public transport whatsoever! A testament to the fact that Americans drive EVERYWHERE, hence their public transport systems aren’t as well developed as cities like Auckland. This often means you need to be creative with how you get around, whether you rely on Uber, make friends with someone who owns a car, or walk, which I wouldn’t recommend since the temperature reaches well over 30 degrees most days.

UTA is actually of a similar size to UoA (about 40,000 students) however, since there is only one campus, everything is extremely spread out and since all the buildings look relatively similar, it can be tricky to find your way around for the first couple of weeks. However, one thing I love about the campus is that everything is flat, unlike Auckland. I definitely don’t miss walking up the hill from Carlaw Park to the OGGB every day! (Although the temperature difference here definitely makes up for the lack of hills.) UTA is also situated right in the middle of a residential area and unlike NZ, dairies or “convenience stores” are pretty scarce. Fortunately the campus hosts a decent range of food options, a bookstore, and even a free gym complete with a swimming pool!

UTA’s version of O-Week is a 3 week “stampede” of 42 different events for students to take part in. It all kicked off the MavsMeet Convocation the day before classes. The school spirit in Texas is huge and the Convocation was insane! Motivational speakers, cheerleaders, fight songs, a full school band and confetti truly made it an experience I will never forget. This was followed by an after party with free food, snow cones, live music, and foosball! Other events over these 3 weeks included a foam party, movie nights, super service Saturday, and the activities fair, which is essentially a clubs expo.

I’ve definitely noticed a difference in the teaching style here in Texas. While in Auckland, most courses have 2-3 lectures per week of a few hundred students, all of my classes at UTA are small teaching sessions of no more than 50 people. This puts a greater emphasis on class participation, and makes it easier for professors to get to know you individually. Also, lectures are not recorded in most US Colleges, again putting a greater emphasis on actually showing up to class and paying attention. The courses here also put less weighting on the final exams (sometimes only about 30%) and opt to spread the workload out over the semester with assignments, tests, labs and quizzes. It’s also not unusual to have 2 finals on the same day as each other as the exam period only runs over about 6 days, rather than 3 weeks like back home.

Greek Life, better known as Fraternities and Sororities, plays a huge role in American College Culture and UTA is no different. I was lucky enough to be invited to my first Frat Party during the first week of classes and it definitely lived up to my expectations. Even if you don’t intend to join a Frat, the parties they host are a great way to meet people, and they are always pretty open during the rushing period. The party I went to had at least 100 people and the fact that you’re from New Zealand is a great conversation starter. And yeah, the movies don’t exaggerate the fact that Americans love their red solo cups!

I feel compelled to talk about this as most people tend to overlook it when coming to the US as the culture shift is not as big as it would be while living in Europe or Asia. For the most part, this is true, however I found that it’s the really subtle differences that add up over time. Things like the climate, time zone shifts, the way Americans speak and interact with you and the way the university operates are all slightly different from back home and can take a bit of getting used to which can leave you feeling pretty drained at times. I’m about a month into my exchange now and I think I’m almost there in terms of adjusting to American culture. Just be aware that culture shock does happen and it’s 100% normal. It always pays to talk to your host university’s international office if it doesn’t feel like it’s getting any better as they have seen it all before and will be able to offer support.

I think it’s pretty safe to say that I’ve caught the travel bug since being on exchange. I’ve already been to LA, Austin, and Salt Lake City. I’ve currently got trips planned to Washington DC, Alaska, New York, and the Grand Canyon, and I’m hoping to get down to New Orleans, Houston, and Nashville before I leave so stay tuned to hear how they go!

I’m more than happy to answer any questions you may have about applying/preparing for an exchange, or about the US in general. You can flick me an email me at jwin740@aucklanduni.ac.nz or if you want to follow my adventures then chuck me a follow on Instagram @josh.winnie.