One of the biggest reasons I chose to go on exchange was because I wanted to travel. Growing up in New Zealand, I never had a good chance to travel around South Korea – my home country – very much. Since I had four months to stay and study here this time, I wanted to make the most of this opportunity to travel a lot. Hence, throughout the semester, I travelled not only in Seoul but other parts of the country too. This is a list of my personal favourites: a top five pick of places to visit in South Korea!

#5 Herb Island
This place is not the usual recommendation you get from doing a similar google search, but I thought it was essential for us to get access to some green stuff. Although Yonsei is located in central Seoul, my accommodation during my stay was Ilsan, which is part of KyungKi-do. South Korea is a very developed country full of skyscrapers and heaps of people. A few weeks into the semester, I started missing the green clean New Zealand reserves, so I made frequent visits to a nearby reserve (which is very rare to find in Korea – and especially Seoul and KyungKi-do) called Herb Island. As suggested by the name, this reserve is full of herb trees, flowers and farm animals. I heard there are actually quite a few of these so-called herb islands out of Seoul. Some of them require you to pay for the entry ticket at the entrance, some places are free of charge. These reserves offer not only trees and fresh air, but also nice coffee and restaurants where you can enjoy a relaxing brunch! If you miss New Zealand during your stay, I recommend you to visit Herb Island. 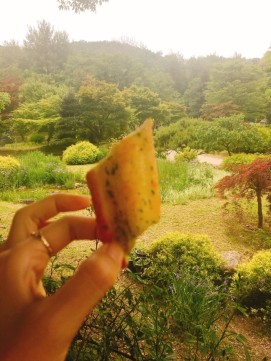 #4 Itaewon
Itaewon is located in the very centre of Seoul and is well known for its diversity and youthful energy. I heard that the U.S. army headquarters is located somewhere near here and so there a lot of foreigners around. (Not only those who serve for the military of course!) Itaewon is a hub of multicultural spirit in the relatively uni-cultural South Korea. Even the restaurants and the retail stores portray diversity in that cuisines from all over the world can be tasted and you can get by without speaking a word of Korean 🙂

#3 GyeongBok-Gung
I made my first visit to GyeongBok-Gung on my first week in South Korea. GyeongBok-Gung is where the old kings and queens used to live so all the buildings are traditionally and beautifully built. It is really odd though, because the GyeongBok-Gung palace is the only traditional building in the area and the whole place is surrounded by skyscrapers and big roads. You can also see a lot of tourists walking around in “Hanbok”- the Korean traditional dress. There are a lot of “Hanbok” rentals around this area that offers Handbok rentals for a cheap price. GyeongBok-Gung is only a five to ten-minute walk to GwangHwamun where the big protest was held a few years back to impeach the ex-president Park. There are usually are lot of events or activities going on in this area. There is almost like a festival theme for every week you come. Last time I went, there was a little temporary telephone booth, which instead of having a telephone, had a memo pad and pens for people to write letters instead of calling their friends and family. This analogue thing is a growing trend in South Korea. Ironically, now that we have technology and convenienve, people are wanting to turn back time to the old days.

#2 Nam-de-moon and Dong-de-moon shopping centre
South Korea is really famous for its shopping culture. It is an absolute must for tourists to visit famous fashion hubs like Myung-Dong, Hong-Dae, Dong-de-moon and more. But if you’re a serious shopper looking for some quality things for a cheap price – I recommend Nam-de-moon and Dong-De-moon. Both places are located in central Seoul – so it is very easy to get there by public transport. The two places are a little different though in that Nam-de-moon is famous for its varied product lines – you can get anything in Nam-de-moon, literally anything. Whereas, Dong-de-moon concentrates more on fashion and accessories. You have to bring cash with you to make good deals, but it is also important to be careful of pickpockets! (South Korea is usually free of pickpockets but Nam-de-moon and Dong-de-moon are obvious targets because everybody carries around cash!) The shops are almost like little booths and things are literally stacked to minimize space.

#1 Jeon-Ra Do
My number one pick would definitely be Jeon-Ra Do. First reason being is this was my very first visit to Jeon-Ra Do (It takes 4 to 5 hours to get to Jeon-Ra do from Seoul). Second reason being is probably because of the food and people! Jeon-Ra Do is very famous for its food! Food is relatively cheap, the portions are bigger and the taste is better! I made a one night two day stay in Jeon-Ra Do, so I had some time to look around some historical landmarks of the place too. I visited Jeon-Dong Catholic church, which is the very first church built in Jeon-Ju City and the Korean traditional buildings (Han-ok) Village. I also visited Gwang-ju public memorial to commemorate those who died during the 5.18 Gwang-ju Uprising. 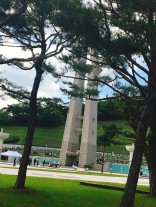 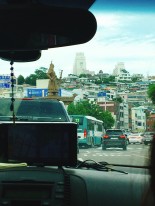 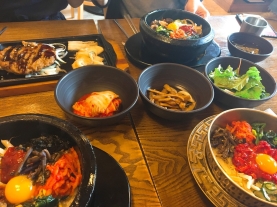 These are my top five picks for places to visit in South Korea. I still have exams going on at the moment and I have been quite busy with school stuff and study for the last few weeks. So I am planning to make the most of my time after my exams to do more travelling around South Korea.

There was an error retrieving images from Instagram. An attempt will be remade in a few minutes.