It’s hard to believe that in another 2 weeks, exams will be over and my time in Glasgow will be coming to an end. Honestly, the thought of that breaks my heart a wee bit (or a lot).

One of the reasons I’ve loved my time here so much is the campus life and student culture in Glasgow. Let’s start with the campus itself; one of the biggest features of UoG is the Main Building which gives off some serious Hogwarts vibes. I’ve been here for a full semester now and walk past the building pretty much every day that I’m at uni, and I sometimes still get awestruck by how it looks, especially on the rare days where we see a few rays of sunshine. 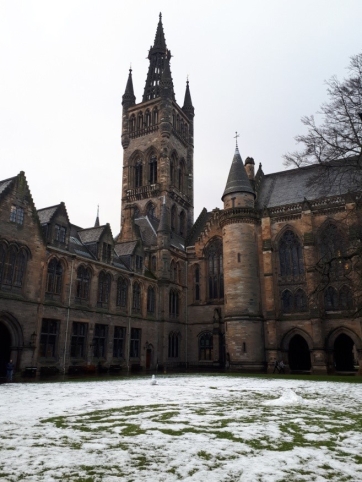 Another iconic feature of UoG is the Cloisters, where graduations are held and have also featured in TV shows like Cloud Atlas and Outlander!

The West End houses a large majority of UoG’s students, making it super student-friendly and convenient. Having come from Auckland, it’s really nice to be able to walk everywhere I need to and not having to deal with commuting or traffic every single day. Uni is only a 15 minute walk away from my accommodation, and there are plenty of supermarkets, cafes, pubs, and bars minutes away from me. I generally don’t even take the bus or subway anywhere as everything’s so close and I actually like walking. Even a night out in town on Sauchiehall Street is doable on foot within 30 minutes.

Despite all the cool things to experience on exchange, let’s not forget that we’re here to study as well. I’m not going to lie, I have sometimes forgotten that I’m here to try and maybe learn a few things. As a conjoint student, I’ve had a bit more flexibility with which classes I could take. This semester, I’ve ended up taking all first and second year classes which are counting towards electives back in Auckland. In all honesty, I feel like I’ve put in less effort in academics this semester than I would in Auckland because I chose to do lower level elective classes. But I’ve gone to almost all my lectures, I promise! Very motivational since the lectures mostly aren’t recorded like they are in Auckland.

Outside of class, I’ve managed to keep myself fairly busy. I’ve been making good use of the uni gym in the Stevenson Building (or fondly known as ‘Stevie’), and going fairly regularly to fitness classes and the netball drop in sessions. Would highly recommend the Supercircuits class – absolute killer of a workout, but the feeling of achievement and endorphins afterwards is unbeatable. I’ve also decided I wanted to try a new sport and found myself joining Farflung, the Glasgow uni ultimate frisbee club. Joining a sports club is something I couldn’t recommend enough to anyone coming to Glasgow. Everyone in Farflung has been super friendly; I’ve learnt a whole new sport, met a whole bunch of great people and even ended up going to a rookie tournament out in Stirling which has definitely been one of the highlights of my time here.

This semester has actually flown by so fast, and I’m really happy with how I’ve taken to living in Scotland. As always, happy to take on any questions and comments!