Being 3 weeks into my semester exchange, I think to say it’s been a lifestyle change wouldn’t do it justice. Of course I was expecting things to be different, however I’m not sure you can ever be truly prepared leave all friends, family and support network to travel halfway across the world to a country where they all speak a different language. In my first three weeks here I have already been presented with various challenges, such as having to change my flat (and squabble with my first landlord in Spanish – not easy) and learn to cook for myself (honestly one of the biggest obstacles I’ve had so far). However, in spite of this, the first few weeks have been a blast and I am loving south America!

From the surface, the city of Santiago seems much like Auckland. It is a city with a similar climate, people making their daily commutes in rush hour traffic – a regular city by anyone’s standards. However, there are a few obvious differences:

Chile is a country filled with beautiful scenery and Santiago itself is situated in a Valley, meaning it is surrounded by mountainous landscape. At first it felt a little strange to be in the centre of a bustling city and yet also be able to look up to see the large mountains looming over you. However, when the sun is going down and the edges of the peaks are all stained pink, it sure does make a beautiful view.

There are just many more people. Attempting to brave the underground metro during peak hour traffic (7:00 – 9:00PM) is overwhelming to say the least. I am consistently amazed at the amount of people they continue to cram into the metro cart when I am sure there is no physical space left.

This is undoubtedly the biggest adjustment I have had to make. You really don’t appreciate the ability to express yourself freely until you are placed in a world where every sentence takes three times more brain power and you are often cut short halfway through a phrase due to lack of vocabulary. Since my arrival in Santiago I have spoken very little English, as only Spanish is spoken both in my classes and in my house. In fact, being able to write this blog in English feels luxurious! However, every day I am improving and learning more!

While I have only been here a short time, I have also attempted a taste at local culture by attending a football game with a group of Chilean friends. Therefore, believe me when I testify to the amount of passion the Chileans have for football. They did not stop singing, at the top of the lungs, for the ENTIRE game, no matter what was happening on the field. It sure was a memorable experience. 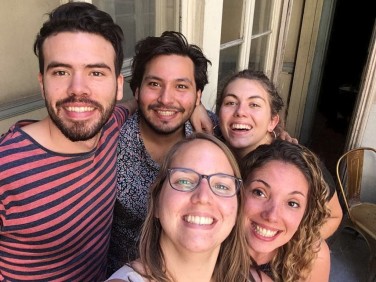 In conclusion: this city seems to offer the perfect amount similarities to home, so as not to be too scary, but also the right amount of differences to make it a challenging new adventure. I am happy to say that I have now settled in, have learnt the routes around my alti-left wing university, and most importantly have met a great bunch of people both in my house and through the exchange network! I look forward to what the next 4 months will bring!