If you’re studying abroad at Trinity College, more likely than not you’ll end up in a shared flat at Binary Hub. This purpose-built complex is run by Aparto, and is situated in Dublin 2, just off Thomas Street and in the depths of the Liberties. (Wikipedia – funnily enough – says more than I ever could on the location, and you can brush up on the history and the contemporary cultural and entertainment scene of the Liberties by skimming through that page.)

I’ve got a few important things to say before we get into the nitty gritty of the actual living situation. I won’t sugar-coat it, because I feel like you ought to be informed if you’re going to be going through a similar process.

When you’re in Dublin: 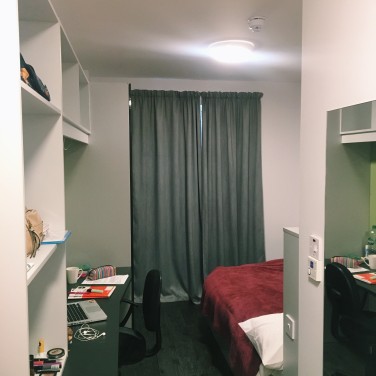 A couple of shots of my bedroom to help you get an idea!

Apologies for the information dump. At least it’s a somewhat comprehensive guide to Dublin! If you’d like to know what I’m up to in a less information-dump style, feel free to check out my Instagram, @tatefountain.

One thought on “Accommodation Awards – Tate”