It’s strange moving halfway across the world to a place you’ve never been before, because as soon as you get there it feels like home. After traveling for six weeks before arriving in Lyon, I was so exhausted from living out of a suitcase and moving between different cities every few days that I was longing for a place to call my own, somewhere to settle in and just take a breath. So after arriving at my new home at midnight, it immediately felt like my place, somehow familiar even though it was completely foreign.

As a result, I never really put my tourist hat back on and explored Lyon as if I was only going to be there for a few days. I never actually set out to see the sights as if I was new to the city, although I absolutely was. Because who goes touristing in your own home, right? But over the four months, I experienced all that Lyon was for tourists, as well as all that it was for locals. There’s something quite special about getting to know a city inside and out without ever really meaning to. I got to the last couple of weeks of my exchange and realised I had practically no photos of myself in Lyon, so went out furiously to all my favourite spots to get some tangible memories. So here are all the best parts of my beautiful city, from the greatest of the popular spots to the tucked away pearls that only a local would know. I hope it inspires you to make a trip to Paris’s lesser frequented but just as breathtaking little sister.

Fourvière/Théâtre Gallo-Romain
It’s probably Lyon’s most famous tourist destination, but the Basilique Notre Dame de Fourvière is undoubtedly the most spectacular part of the city, not just because of the awe-inspiring 19th-century basilica but because of its positioning before a perfect panorama of Lyon and its surroundings. I visited Fourvière several times with all the different people who came to stay with me while I was on my exchange, and it never failed to impress me, snow or shine. Just along from the basilica are the ruins of the Théâtre Gallo-Romain, which is estimated to have been constructed in 15BC, telling an incredible story of Lyon’s long history. 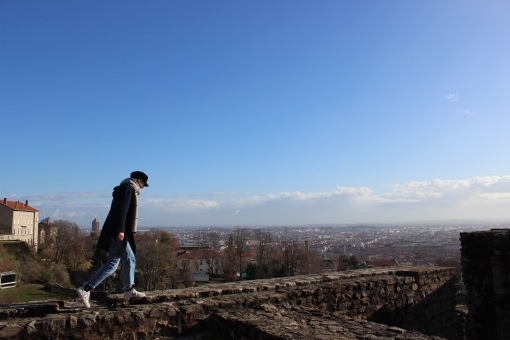 Les Confluences
A striking contrast from the rest of the ancient, medieval and renaissance city, the area of Les Confluences is a modern architectural triumph. The end point of the Presqu’île where the Rhône and Saône rivers merge, the former industrial wasteland is now a leading urban renewal project, using environmentally-sustainable design. A cluster of bizarre, colourful buildings and a vibrant sense of community, a visit to Les Confluences is exciting and thought-provoking. My favourite experience is walking along the river with the huge modernistic buildings on one side, and ancient
viaducts and manor houses on the other.

Musee des Beaux-Arts
I didn’t make time to pay a visit to the Musée des Beaux-Arts until my last week in the city, and boy did I have regrets about it! One of France’s largest art museums, we spent about three hours there and barely scratched the surface of all the incredible works, from ancient antiquities to room-size modern art pieces. The building itself, which used to be a royal abbey in the 17th century, could pass as its own work of art. I think if I’d known how incredible the museum was earlier, I would have spent every weekend finding new works to stand in front of and make sense of, filling my
heart to its content.

Johnny’s Kitchen
Ah, Johnny’s. My local haunt, frequented far too often for a pint of Belhaven Cider and occasional bowl of their insane hand-cut fries. This Irish pub was literally 40m away from the entrance to my apartment, which became very useful for me in the colder months when my friends were after a few drinks. The Anglophone vibe of the pub was its best asset for a girl craving a break from having to battle through a French sentence, with Irishmen, British-folk, Australians and Americans aplenty. There was even a girl from Ashburton working on the bar – small world, right?

Fête des Lumières
During the first weekend of December each year, Lyon experiences a wild population increase as the city lights up for the Fête des Lumières (Festival of Lights). On the 8th of December, the Lyonnais put candles on their window sill to pay tribute to the Virgin Mary, whose statue overlooks the city from Fourvière hill. Every year, the festival has become more and more remarkable, with light shows, exhibitions, performances and artists’ installations. It really is an incredible experience, but not one that the Lyonnais enjoy too much, with millions of visitors flooding the streets to see what will be on display.

Croix Rousse
The other of Lyon’s hills is a well known tourist spot, but it takes weeks, even months, to discover all of Croix Rousse’s best spots. Filled with narrow uphill streets, hidden ‘traboules’ (small passageways between courtyards and buildings), thrift shops and boutiques, and the best cafés in town, Croix Rousse is the place to be if you’re looking for secret places to call your own. Even after four months, I still feel like the best is yet to be discovered.

Place des Celestins
In my opinion, the most magical corner of Lyon is the Place des Celestins, right outside the iconic Théâtre des Celestins. This spot breathes culture, history and community, being the meeting point for not only theatre-goers but also Lyonnais who seek a place to kick a ball, to hang out with friends, or to quietly read a book. It is perfect during the day and even more enchanting at night, when it is illuminated by all its beautiful lights. My only regret is that I didn’t get to go inside – if it looks this good on the outside I can only imagine what it’s like on the inside!