Food! Cuisine is at heart of any culture, and often how we best identify a nation. The Netherlands, much like New Zealand, does not really have a distinctively ‘Dutch’ food tradition. Instead, as the centre of a former colonial empire, Amsterdam has drawn its food culture from the influences of its former colonies and its widely multicultural immigrant population. The diversity in the restaurant scene is massive – from Ethiopian to Catalan, Brazilian to Belgian. The most common eateries are from from the colonies; Surinamese, Indonesian and Vietnamese eateries on every block in the city centre. But despite the density of food joints in the area, the overall quality is somewhat lacking (at least in my experience). The city centre of Amsterdam is very touristy, and often the food is either very tasty and very expensive, or moderately priced and rather average. The Asian cuisines to which the Netherlands has a historical connection to are often unauthentic, catering to a Dutch palette. This means that any Vietnamese or Indonesian snacks on offer are almost always fried and very mild.

If there is any distinctly Dutch cuisine, fried and mild is by far the distinctive characteristic. Dutch snacks include bitterballen (fried balls of breaded ragu), croquettes (fried rolls of breaded ragu), cheese soufflé (fried cheese wrapped in pastry), and most importantly, fries. Belgian chips (Vlaams frites) are everywhere, and given that I am cursed with the dreaded 21st century inability to consume gluten, fries are really my only entry point into Dutch food culture. Not that this is any hardship. The Dutch know how to do chips well. The most common way to receive chips is in a paper cone smothered in mayonnaise, but other common toppings are curry sauce, satay sauce, or my favourite, oorlog: half mayonaise, half satay sauce topped with diced raw onions. Don’t judge it until you’ve tried it. The city centre is dotted with hole-in-the-wall chip shops claiming to offer the best fries in Amsterdam, but it’s all false advertising. The best chips by far are found in Grillroom “Twins” in the Jordaan district. The chips are ‘verse’ (fresh), and the sauces are top notch.

Given that eating out is either hard on the wallet or the waistline, it’s no surprise that Dutch students most frequently cook at home. ‘Dammers get most of their daily nutrition at the popular supermarket chain, Albert Heijn. After the bikes, I’d say it’s one of the key aspects of Amsterdam life that the locals are most proud of. And it’s easy to see why. Albert Heijn is no ordinary supermarket. Every store contains around three  different cheese sections, surpassing any variety you’ll find in the hyper-touristy ‘cheese shops’. There will also always be a DIY fresh orange juice press present, as well as an impressive selection of cured meats and spreads. And the gluten free section is better than even New Zealand! Price-wise, Amsterdam is typically a bit cheaper than Auckland, but not by a significant margin. 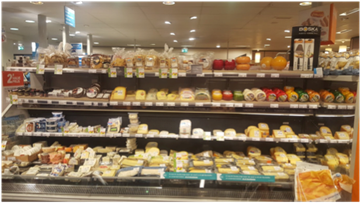 A trick I’ve picked up to further cut down on costs is to buy all my fresh produce at one of the various local markets. My favourite, the Ten Kate market, is a 10 minute bike ride from home and I can get all my fruit, vege and eggs for the week for under €6, or 9 NZD! And if you feel like treating yourself, there are always beautiful fresh cheese stalls, or Turkish stalls selling a wide variety of hummus and other spreads, or any other fresh and authentic offerings to indulge in.

As a final note, I would like to make a brief lament to my lost love: New Zealand coffee. The Auckland food scene is something I took for granted, and while I can live without weekend brunches and the occasional dinner out, the absence of decent coffee took some real adjustment. It turns out a great deal of Europe simply don’t know how to do coffee. It’s a broad statement, but as an ex-Auckland waitress and barista, I’m standing by it. Most cafes in Amsterdam only offer coffee made entirely by an automatic machine, and if it is made by hand you really have two options (regardless of how many options are displayed): weak black coffee or huge milky coffee with piles of foam. That being said, it is often cheaper than New Zealand coffee, and after converting from my regular order of flat white (very difficult to find in Amsterdam) to ‘koffie’ (Americano), I’ve become accustomed to the Dutch approach to coffee. And if coffee lovers are heading out to Amsterdam, there are certainly great places if you’re willing to hunt them out. My favourite spots to head to if I’m in need of a decent coffee are White Label, Lottie’s, Coffee Company (pretty good chain cafe), and Toki.