“While America isn’t the cultural opposite of New Zealand like some other exchange programs, culture shock still hit me. From the super-sized food, to realizing Greek life isn’t just in movies and perhaps even that America might just be the greatest country in the world, at least for the college experience anyway.” – Josh Barkle, Rutgers University 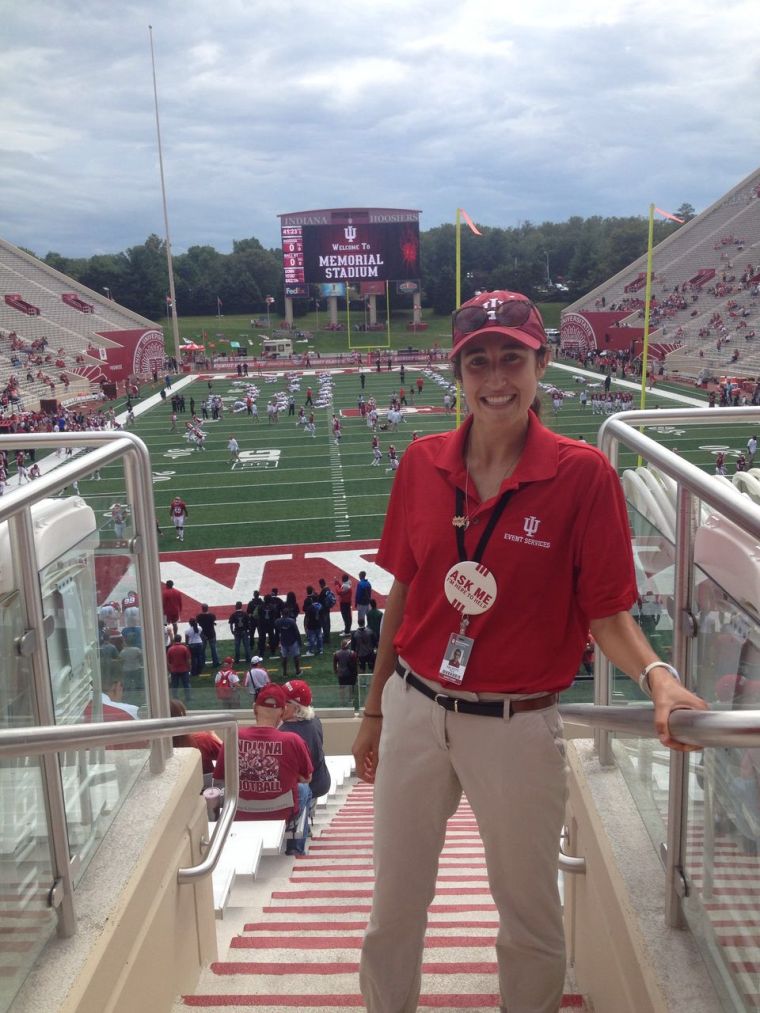 “My host city (Bloomington) is very much a University town. This meant that when I arrived before the start of class, there was no one around. I was shocked at the beauty of the campus, but found myself very lost within it for the first month or so. When class began, and the University started humming with people, I knew I had made the right decision.” – Felicity Ellis, Indiana University

“The law school’s orientation over two days was full of helpful tips from enrolling in classes, to learning about $2 Tuesdays at a local bar, to helping me meet two people who became my closest friends during my time at IU. As the weeks drew on I realised quickly how easy it was to fall in love with IU and Bloomington. The people are friendly and passionate, professors are interested and engaging and campus life is always exciting. Despite being a small college town, Bloomington always had something going on and the law school had a great social life. It had a great selection of international food, nightlife, sporting, musical and theatrical events. IU has a world class music school and I was able to attend my very first opera. Indiana also lives and breathes basketball, and Bloomington and IU deep in Hoosier Country, is no different.” – Jemimah Rebello, Indiana University

“College in the US was a completely unique experience compared to University in New Zealand, the style of learning is very different, and there is a much greater focus on in classroom learning and interaction with the teachers than on readings and self-driven learning. Living in a college town was an incredible experience, there is always something happening and something to do, and the food is cheap and delicious which is always a plus. The accommodation at the college was excellent, I was housed in a nice apartment near the main campus with another exchange student from Australia and 2 regular Rutgers student who really helped me acclimatize to life at the school and get the most out of my time at the college.” – Shay Webster, Rutgers University

“In terms of Rutgers, I could not have asked for a more welcoming and engaging experience. The university was very accommodative and due to the size of the university, offered a plethora of courses with far more depth than I have experienced previously. I was primarily interested in finance, and the University offered specialised courses that would not be offered elsewhere. Given the smaller course sizes, it offered a more personal lecturer/student setup which I definitely enjoyed. Many people ask: “why did you chose Rutgers?” The simple answer is Google maps. Rutgers is literally a short train ride from downtown Manhattan and provided an easy base to go explore the East Coast of America.” – Thomas Smith, Rutgers University

“The courses at Penn State are very well taught, one of my professors was a former Boeing engineer. It was great to learn from somebody with that kind of industry experience. All the other professors were good as well, they all set aside time for students and due to the small class sizes in America can give more individual attention to each student.” – William Cran, Penn State University

“I was involved in many clubs/societies at Penn State such as Lion Tech Rocket Labs, Aero Design club, 3D printing club, Engineers without borders, Project PAWS and THON. All these commitments kept me very busy and involved with the university whist helping me meet more people faster. Having exposure into the engineering industry I developed a passion in the aerospace field. Having found my career interest at Penn State has given me the drive to push myself and put in the extra effort where needed to ensure I follow this pathway. To me, finding this kind of passion is priceless because it gives me a general direction of where my future is going.” – Tharaka Munidasa, Penn State University

“In general, Northeastern University had a very different teaching style than I was used to at Auckland – classes of around 30 people, with Professors who took an active interest in your ideas and were marked largely on participation. There was a much larger range of papers (or what they call courses) which meant that I really enjoyed the stuff I was learning. I felt I gained more general knowledge from this, and thus was better prepared for ‘finals’ week, in mid-December” – Emma Rennie, Northeastern University

“My courses at Northeastern were superior, I had small class sizes, and it felt very personal. It was primarily coursework, presentations, and in class tests; only one of my classes had an exam. I was quite involved in my extracurricular activities on campus, particularly with the entrepreneurship club, where I became friends with many of the executive committee and the fashion and retail club, where I even spoke at one of their panel discussions as a panellist! Life on campus was fast, everyone is constantly in a hurry, and initially it was freezing, but as long as you layered up, you were fine. The campus also became pretty easy to navigate within a week or two, and people helped if you asked!” – Devrath Soni, Northeastern University

The University of Connecticut 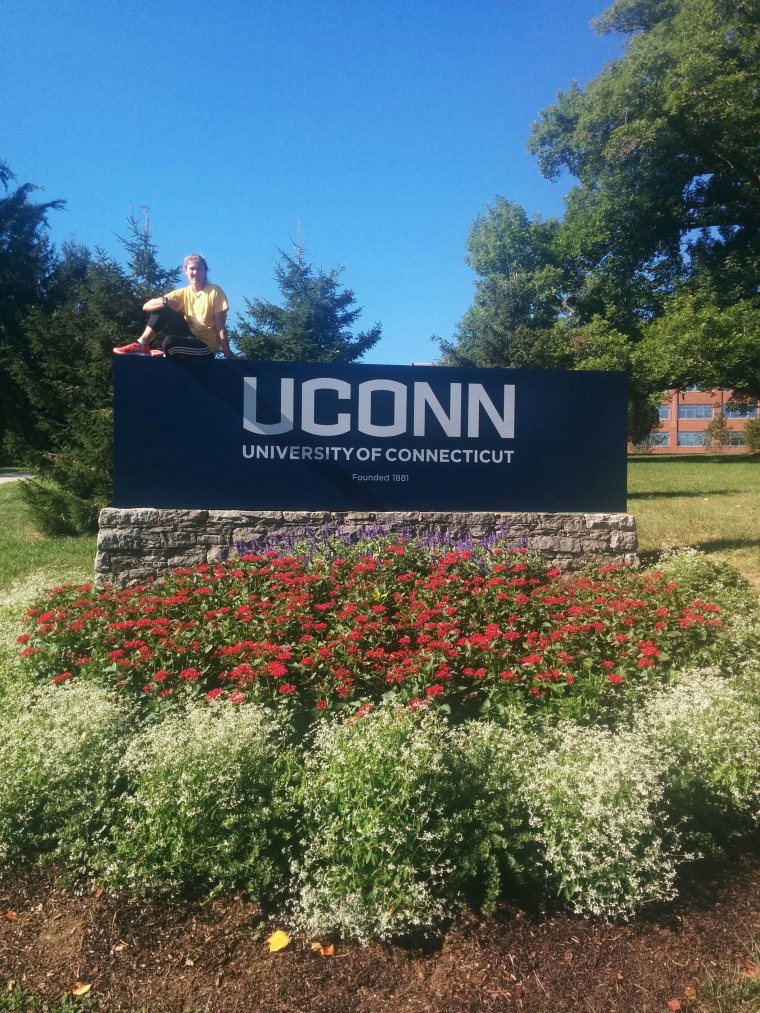 “The university is located in Storrs, Connecticut, an extremely small town with the University making up most of its population. This was a vast contrast with Auckland University’s city campus.The campus is beautiful and extremely picturesque in the snow. Although quite isolated, this meant that students tended to stay on campus meaning there was always something to do and people to hang out with. Being located on the east coast of the US made travelling to places such as New York and Boston easy and I was lucky to travel to both multiple times over the year. Everyone at UConn had mad school spirit and the pride of being a Husky was infectious making all sporting events super exciting.” – Lisa Hoshina, The University of Connecticut

“In order to make the most of the experience I made sure I fully participated in college life both academically and socially. Living in a dorm was a new experience but one that I thoroughly enjoyed and now have a great bunch of mates over in America. There are many subtle cultural differences that you notice that remind you, you are not at home but when embraced can result in an amazing time. College sport is highly followed in America, especially in Connecticut as there are no pro teams so the UConn teams are supported not just by students but also people from around the state. Going to a basketball game on campus was like nothing I had ever experienced before, with 12000 people including a large student section fully behind their team. Staying in Connecticut also meant that I was close to Boston, New York and Canada. This allowed me to take weekend trips to these places an experience big city America and see the sights. While at UConn I met up with many other exchange students from all over the world, who like me wanted to travel and experience America, resulting in you never being alone when travelling around.” Andrew McQueen, The University of Connecticut

“The campus not only includes facilities to host lectures, research laboratories and classrooms, but also several housing buildings, activity centers, gyms and food courts. There are internal buses that run throughout campus, making it easily accessible for students. Additionally, the train station is also located on campus which makes it easier to travel, something I tried to make the most of during weekends. The exchange students got the opportunity to live in apartments on campus, where we flat with other students and share a common kitchen and bathrooms. Although New York is traditionally known for its high cost of living, but I felt that the semester cost for accommodation was reasonable, and around about what you would expect when you compare it to Auckland. Getting used to the lifestyle of living on campus as opposed to going back home every day was initially challenging. However, the company of great people, the wonderful facilities at Stony Brook and all the weekend travelling made my stay loads of fun.” – Dheeraj Gopalakrishnan, University of Stony Brook

“Going overseas lets you become a child again. Everything is new and amazing. Doing the grocery shopping overseas is no longer a chore. It’s more of an eye opening experience; seeing new foods and taking in the culture of your current whereabouts. New York City truly has it all; the magnificent skyline, the boutique eateries, and the high-class fashion stores. E everything you can imagine, you will find in NYC. On long Island, a short two-hour train ride out of the city, is Stony Brook University (SBU) my adopted home for my Semester abroad.  SBU doesn’t feel like a University, it’s more like a small community. Each week there are numerous events to get students immersed in College life. Orientation involved a day where we were gorged on food and met all the other exchange students from around the world. This was a diverse group and I encourage you to meet as many of these people as you can, as they will be your family during your time overseas.” – Andrew Luey, University of Stony Brook